Experimental realization of U(1) gauge invariance in ultracold atomic mixtures

This thesis reports on the experimental realization of an elementary building block for analog quantum simulation of a U(1) lattice gauge theory in a mixture of two bosonic quantum gases. Experimentally, the building block is realized by Bose-Einstein condensates of lithium and sodium condense d in a single optical dipole trap. Gauge and matter degrees of freedom are mapped in this system onto the internal states of the atomic species. The necessary U(1) gauge invariance is realized via heteronuclear spin changing collisions (SCC) between both species. The building block represents an important stepstone towards quantum simulation of extended lattice gauge theories as, within the same setting, it features systematic protection of gauge invariance, a realistic approach of the continuum limit for gauge fields and the potential for scalability. Using SCC, systematic protection of gauge invariance in the system is achieved by exploiting the inherent angular momentum conservation in the atomic mixture. The continuum limit of gauge fields is recovered in the framework of quantum link models by working with Bose-Einstein condensates with high atom numbers in the order of $10^5$. The building block can be scaled up to an extended U(1) lattice gauge theory by arranging individual building blocks on the sites of an optical lattice and connecting them via Raman-assisted tunneling. Great tunability of our experimental building block is demonstrated by studying SCC dynamics as a function of various experimental parameters. We observe coherent SCC interactions between both species after an initialization quench. Furthermore, we recorded the SCC resonance as a function of this initialization quench and the offset magnetic field. We present a theoretical framework for the building block model based on a mean field theory with a phenomenological decoherence term. Within this framework the experimental SCC measurements are excellently described, identifying our experimental system as a faithful representation of the building block. Our results open up the possibility for extended lattice gauge theories based on multiple building blocks. These systems will allow for quantum simulation of gauge theories with the potential to address important questions in modern physics that can currently not be simulated by classical computational techniques. 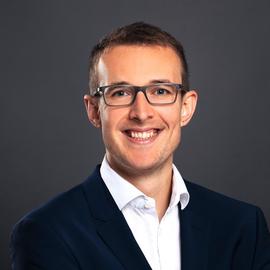